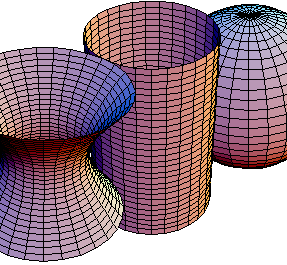 The surface of a marble table is spread out in front of me. I can get from any one point on this table to any other point by passing continuously from one point to a “neighboring” one, and repeating this process a (large) number of times, or, in other words, by going from point to point without executing jumps.” I am sure the reader will appreciate with sufficient clearness what I mean here by “neighboring” and by “jumps” (if he is not too pedantic). We express this property of the surface by describing the latter as a continuum.

Let us now imagine that a large number of little rods of equal length have been made, their lengths being small compared with the dimensions of the marble slab. When I say they are of equal length, I mean that one can be laid on any other without the ends overlapping. We next lay four of these little rods on the marble slab so that they constitute a quadrilateral figure (a square), the diagonals of which are equally long. To ensure the equality of the diagonals, we make use of a little testing-rod. To this square we add similar ones, each of which has one rod in common with the first. We proceed in like manner with each of these squares until finally the whole marble slab is laid out with squares. The arrangement is such, that each side of a square belongs to two squares and each corner to four squares.

It is a veritable wonder that we can carry our this business without getting into the greatest difficulties. We only need to think of the following. If at any moment three squares meet at a corner, then two sides of the fourth square are already laid, and as a consequence, the arrangement of the remaining two sides of the square is already completely determined. But I am now no longer able to adjust the quadrilateral so that its diagonals may be equal. If they are equal of their own accord, then this is an especial favor of the marble slab and of the little rods about which I can only be thankfully surprised. We must needs experience many such surprises if the construction is to be successful.

If everything has really gone smoothly, then I say that the points of the marble slab constitute a Euclidean continuum with respect to the little rod, which has been used as a “distance” (line-interval). By choosing one corner of a square as “origin,” I can characterize every other corner of a square with reference to this origin by means of two numbers. I only need state how many rods I must pass over when, starting from the origin, I proceed towards the “right” and then “upwards,” in order to arrive at the corner of the square under consideration. These two numbers are then the “Cartesian coordinates” of this corner with reference to the “Cartesian co-ordinate system” which is determined by the arrangement of little rods.

By making use of the following modification of this abstract experiment, we recognize that there must also be cases in which the experiment would be unsuccessful. We shall suppose that the rods “expand” by an amount proportional to the increase of temperature. We heat the central part of the marble slab, but not the periphery, in which case two of our little rods can still be brought into coincidence at every position on the table. But our construction of squares must necessarily come into disorder during the heating, because the little rods on the central region of the table expand, whereas those on the outer part do not.

With reference to our little rods—defined as unit lengths—the marble slab is no longer a Euclidean continuum, and we are also no longer in the position of defining Cartesian co-ordinates directly with their aid, since the above construction can no longer be carried out. But since there are other things which are not influenced in a similar manner to the little rods (or perhaps not at all) by the temperature of the table, it is possible quite naturally to maintain the point of view that the marble slab is a “Euclidean continuum.” This can be done in a satisfactory manner by making a more subtle stipulation about the measurement or the comparison of lengths.

But if rods of every kind (i.e. of every material) were to behave in the same way as regards the influence of temperature when they are on the variably heated marble slab, and if we had no other means of detecting the effect of temperature than the geometrical behavior of our rods in experiments analogous to the one described above, then our best plan would be to assign the distance one to two points on the slab, provided that the ends of one of our rods could be made to coincide with these two points; for how else should we define the distance without our proceeding being in the highest measure grossly arbitrary? The method of Cartesian co-ordinates must then be discarded, and replaced by another which does not assume the validity of Euclidean geometry for rigid bodies. 1 The reader will notice that the situation depicted here corresponds to the one brought about by the general postulate of relativity.

Mathematicians have been confronted with our problem in the following form. If we are given a surface (e.g. an ellipsoid) in Euclidean three-dimensional space, then there exists for this surface a two-dimensional geometry, just as much as for a plane surface. Gauss undertook the task of treating this two-dimensional geometry from first principles, without making use of the fact that the surface belongs to a Euclidean continuum of three dimensions. If we imagine constructions to be made with rigid rods in the surface (similar to that above with the marble slab), we should find that different laws hold for these from those resulting on the basis of Euclidean plane geometry. The surface is not a Euclidean continuum with respect to the rods, and we cannot define Cartesian co-ordinates in the surface. Gauss indicated the principles according to which we can treat the geometrical relationships in the surface, and thus pointed out the way to the method of Riemann of treating multi-dimensional, non-Euclidean continua. Thus it is that mathematicians long ago solved the formal problems to which we are led by the general postulate of relativity.