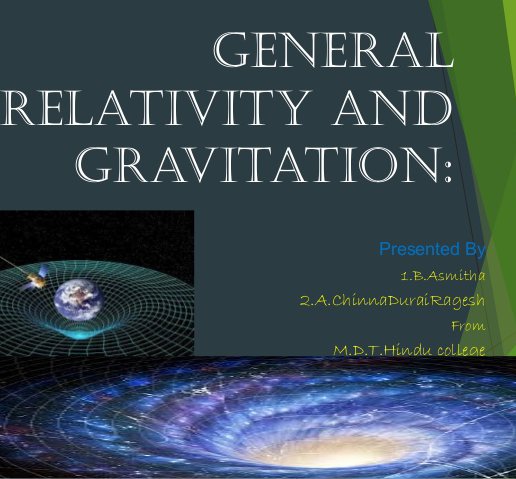 We start off from a consideration of a Galileian domain, i.e. a domain in which there is no gravitational field relative to the Galileian reference-body K. The behavior of measuring-rods and clocks with reference to K is known from the special theory of relativity, likewise the behavior of “isolated” material points; the latter move uniformly and in straight lines.

The next step is to investigate the space-time behavior of the gravitational field G, which was derived from the Galileian special case simply by transformation of the co-ordinates. This behavior is formulated in a law, which is always valid, no matter how the reference-body (mollusk) used in the description may be chosen.

Finally, the general principle of relativity permits us to determine the influence of the gravitational field on the course of all those processes which take place according to known laws when a gravitational field is absent, i.e. which have already been fitted into the frame of the special theory of relativity. In this connection we proceed in principle according to the method which has already been explained for measuring-rods, clocks and freely-moving material points.

If we confine the application of the theory to the case where the gravitational fields can be regarded as being weak, and in which all masses move with respect to the co-ordinate system with velocities which are small compared with the velocity of light, we then obtain as a first approximation the Newtonian theory. Thus the latter theory as obtained here without any particular assumption, whereas Newton had to introduce the hypothesis that the force of attraction between mutually attracting material points is inversely proportional to the square of the distance between them. If we increase the accuracy of the calculation, deviations from the theory of Newton make their appearance, practically all of which must nevertheless escape the test of observation owing to their smallness.

We must draw attention here to one of these deviations. According to Newton’s theory, a planet moves round the sun in an ellipse, which would permanently maintain its position with respect to the fixed stars, if we could disregard the motion of the fixed stars themselves and the action of the other planets under consideration. Thus, if we correct the observed motion of the planets for these two influences, and if Newton’s theory be strictly correct, we ought to obtain for the orbit of the planet an ellipse, which is fixed with reference to the fixed stars. This deduction, which can be tested with great accuracy, has been confirmed for all the planets save one, with the precision that is capable of being obtained by the delicacy of observation attainable at the present time. The sole exception is Mercury, the planet which lies nearest the sun. Since the time of Leverrier, it has been known that the ellipse corresponding to the orbit of Mercury, after it has been corrected for the influences mentioned above, is not stationary with respect to the fixed stars, but that it rotates exceedingly slowly in the plane of the orbit and in the sense of the orbital motion. The value obtained for this rotary movement of the orbital ellipse was 43 seconds of arc per century, an amount ensured to be correct to within a few seconds of arc. This effect can be explained by means of classical mechanics only on the assumption of hypotheses which have little probability, and which were devised solely for this purpose.

On the basis of the general theory of relativity, it is found that the ellipse of every planet round the sun must necessarily rotate in the manner indicated above; that for all the planets, with the exception of Mercury, this rotation is too small to be detected with the delicacy of observation possible at the present time; but that in the case of Mercury it must amount to 43 seconds of arc per century, a result which is strictly in agreement with observation.

Apart from this one, it has hitherto been possible to make only two deductions from the theory which admit of being tested by observation, to wit, the curvature of light rays by the gravitational field of the sun, 1 and a displacement of the spectral lines of light reaching us from large stars, as compared with the corresponding lines for light produced in an analogous manner terrestrially (i.e. by the same kind of molecule). I do not doubt that these deductions from the theory will be confirmed also.