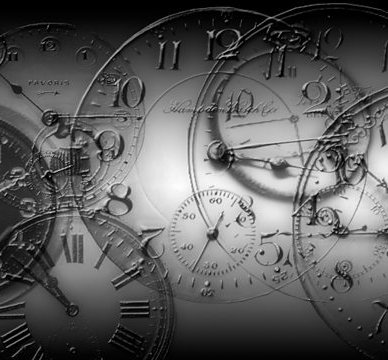 HITHERTO: I have purposely refrained from speaking about the physical interpretation of space- and time-data in the case of the general theory of relativity. As a consequence, I am guilty of a certain slovenliness of treatment, which, as we know from the special theory of relativity, is far from being unimportant and pardonable. It is now high time that we remedy this defect; but I would mention at the outset, that this matter lays no small claims on the patience and on the power of abstraction of the reader.

We start off again from quite special cases, which we have frequently used before. Let us consider a space-time domain in which no gravitational field exists relative to a reference-body K whose state

of motion has been suitably chosen. K is then a Galileian reference-body as regards the domain considered, and the results of the special theory of relativity hold relative to K. Let us suppose the same domain referred to a second body of reference K', which is rotating uniformly with respect to K. In order to fix our ideas, we shall imagine K' to be in the form of a plane circular disc, which rotates uniformly in its own plane about its center. An observer who is sitting eccentrically on the disc K' is sensible of a force which acts outwards in a radial direction, and which would be interpreted as an effect of inertia (centrifugal force) by an observer who was at rest with respect to the original reference-body K. But the observer on the disc may regard his disc as a reference-body which is “at rest”; on the basis of the general principle of relativity he is justified in doing this. The force acting on himself, and in fact on all other bodies which are at rest relative to the disc, he regards as the effect of a gravitational field. Nevertheless, the space-distribution of this gravitational field is of a kind that would not be possible on Newton’s theory of gravitation. 1 But since the observer believes in the general theory of relativity, this does not disturb him; he is quite in the right when he believes that a general law of gravitation can be formulated—a law which not only explains the motion of the stars correctly, but also the field of force experienced by himself.

The observer performs experiments on his circular disc with clocks and measuring-rods. In doing so, it is his intention to arrive at exact definitions for the signification of time- and space-data with reference to the circular disc K, these definitions being based on his observations. What will be his experience in this enterprise?

To start with, he places one of two identically constructed clocks at the center of the circular disc, and the other on the edge of the disc, so that they are at rest relative to it. We now ask ourselves whether both clocks go at the same rate from the standpoint of the non-rotating Galileian reference-body K. As judged from this body, the clock at the center of the disc has no velocity, whereas the clock at the edge of the disc is in motion relative to K in consequence of the rotation. According to a result obtained in Section XII, it follows that the latter clock goes at a rate permanently slower than that of the clock at the center of the circular disc, i.e. as observed from K. It is obvious that the same effect would be noted by an observer whom we will imagine sitting alongside his clock at the center of the circular disc. Thus on our circular disc, or, to make the case more general, in every gravitational field, a clock will go more quickly or less quickly, according to the position in which the clock is situated (at rest). For this reason it is not possible to obtain a reasonable definition of time with the aid of clocks which are arranged at rest with respect to the body of reference. A similar difficulty presents itself when we attempt to apply our earlier definition of simultaneity in such a case, but I do not wish to go any farther into this question.

Moreover, at this stage the definition of the space co-ordinates also presents insurmountable difficulties. If the observer applies his standard measuring-rod (a rod which is short as compared with the radius of the disc) tangentially to the edge of the disc, then, as judged from the Galileian system, the length of this rod will be less than 1, since, according to THE BEHAVIOR OF MEASURING RODS AND CLOCKS IN MOTION, moving bodies suffer a shortening in the direction of the motion. On the other hand, the measuring-rod will not experience a shortening in length, as judged from K, if it is applied to the disc in the direction of the radius. If, then, the observer first measures the circumference of the disc with his measuring-rod and then the diameter of the disc, on dividing the one by the other, he will not obtain as quotient the familiar number π = 3.14 . . ., but a larger number, 1 whereas of course, for a disc which is at rest with respect to K, this operation would yield π exactly. This proves that the propositions of Euclidean geometry cannot hold exactly on the rotating disc, nor in general in a gravitational field, at least if we attribute the length 1 to the rod in all positions and in every orientation. Hence the idea of a straight line also loses its meaning. We are therefore not in a position to define exactly the co-ordinates x, y, z relative to the disc by means of the method used in discussing the special theory, and as long as the co-ordinates and times of events have not been defined we cannot assign an exact meaning to the natural laws in which these occur.

Thus all our previous conclusions based on general relativity would appear to be called in question. In reality we must make a subtle detour in order to be able to apply the postulate of general relativity exactly. I shall prepare the reader for this in the following paragraphs.