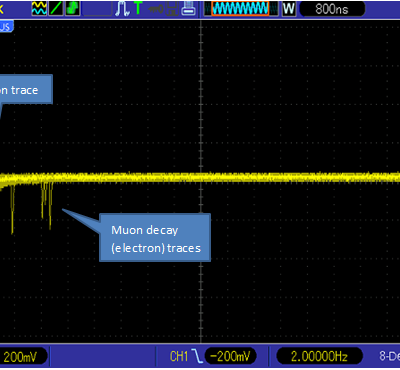 THE DECAY OF MUONS PART ONE

Real experiments have been performed, however, which provide striking confirmation of time dilation. In this section, I describe an experiment based on the decay of muons-unstable particles that were first discovered among the cosmic rays that continuously bombard the earth.

Muons decay according to the scheme

The details of the decay process are irrelevant; the only feature we need be concerned with is that muon decay, like any radioactive decay, is a probabilistic process characterized by a half-life, T. Out of any group of identically prepared muons, approximately half will have decayed within a time interval T. After another interval T has passed, half the survivors will have decayed and only a quarter of the original number remain, and so on. The half-life of muons at rest is about 1.5 microseconds.

The question at issue concerns the half-life of muons in motion. According to Galilean relativity, the motion should have no effect on the probability of decay; moving muons should have the same half-life as muons at rest.

Special relativity predicts a quite different outcome. Consider a beam of muons, all moving at the same speed v. The first postulate implies that in the muons' rest frame their half-life must be 1.5 microseconds. That is, after 1.5 microseconds have elapsed according to clocks that move with the muons, half of them will have decayed. The 1.5 microseconds is a proper time interval.

For earth observers, the corresponding time interval is improper. The time interval during which half the muons decay, as measured by earth clocks, is therefore y(v) times 1.5 microseconds, where y(v) is the time dilation factor that corresponds to the speed v. Letting To denote the rest half-life and T(v) the half-life for muons moving at velocity v, we conclude that according to special relativity,

The faster the muons move, the longer they should survive according to clocks at rest in the laboratory. We may regard the group of muons as a specialized clock that "ticks" once every 1.5 microseconds in its own rest frame; at each tick, half the muons decay. According to observers in the laboratory, for whom that clock is in motion, it (like any other moving clock) runs slow: it "reads" 1.5 microseconds when the true elapsed time, measured by clocks at rest in the laboratory, is longer by the factor y(v). This prediction is subject to direct experimental test.

The first experiment was carried out in 1940 by Bruno Rossi and D. B. Hall, who used the cosmic ray "beam" that was then beginning to be studied and was known to contain many muons moving at speeds very close to c. If the half-life of those muons were equal to To, the beam should advance a distance cTo, some 450 meters, by the time half the muons had decayed. According to special relativity, with the half-life given by equation (1), the distance should be greater.

Rossi and Hall measured the attenuation of the cosmic ray muon beam as it proceeds down through the atmosphere; the attenuation is caused primarily by the decay of muons en route. They designed an array of Geiger counters that would register a count whenever a muon passed vertically through it and not when any other type of particle passed through. They took their equipment to several stations in Colorado, at different elevations. At each elevation, they measured the average number of counts per second. Figure 3.13 is a schematic view of the experiment, showing one trial with the detector at Echo Lake (elev. 3,200 m) and an-other at Denver (elev. 1,600 m).

In addition to decays, another effect depletes the muon beam as it passes through the atmosphere: some of the muons collide with oxygen or nitrogen atoms in the atmosphere and are absorbed. The experimenters corrected for this effect by placing a layer of iron above the detector at the higher elevation. Since iron is much denser than air, about 20 centimeters of iron absorbs as many muons as does all the atmosphere between the two elevations. Any difference in the measured counting rates at the two stations could therefore be attributed to the decay of muons in the in-tervening region.