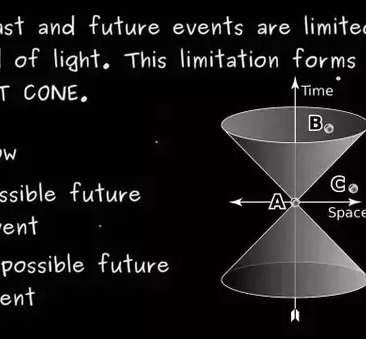 The Postulates of Relativity and Their Implications Part Three

THE RELATIVITY OF TIME: SIMULTANEITY

The most profound conceptual implication of special relativity is the change it has brought about in our perception of the nature of time. Relativity requires us to reject the notion of absolute time, which was taken for granted by Newton and by all the thinkers who followed him.
In a world in which time is absolute, the following proposition is surely valid: if observers in different inertial frames measure the time interval between two events, using identically constructed clocks, the measured time intervals will in every instance be equal. The proposition is (at least in principle) subject to experimental test. Although our intuition strongly suggests that the result of all such tests must be positive, it is conceivable that the measured time intervals might sometimes turn out to be different. In that case, absolute time would have to be abandoned. Einstein's postulates predict just such an outcome, and the prediction is confirmed (albeit indirectly) by experimental evidence. All the major conceptual consequences of special relativity can be related to the relativity of time.
I introduce the relativity of time by analyzing the concept of simultaneity. If tin1e is absolute, two events that occur at the same time according to one set of observers must be simultaneous as well for any other set. The second postulate leads inescapably to a contrary conclusion: other observers find that the events are not simultaneous. This result suffices to establish the relativity of time.
One bit of reassurance can be offered the reader. If two events occur simultaneously at the same place, a single observer can directly experience both: she can see them happen together. Such events are simultaneous in any frame even according to special relativity. In fact, since an event is characterized by its space and time coordinates, two events that occur at the same time and at the same place can be regarded as parts of a single event.
If, however, two events take place at different locations in a particula frame of reference, no single observer in that frame can experience both. Determination of simultaneity in such a case is a complicated procedure, as has already been discussed in chapter 1. Two observers are required, one at the location of each event; each observer records the reading of a clock on the scene, and the two readings are subsequently compared. If the readings are the same (and if the clocks are properly synchronized), the observers conclude that the events in question were simultaneous.
After all that exchange. of information, however, simultaneity at a distance must be regarded as an inference rather than a sensory observation. Special relativity predicts that if observers belonging to a different inertial frame record the times of the same two events on their (separated) clocks, those clock readings will be unequal. That prediction, although counter-intuitive, does not contradict any sensory experience