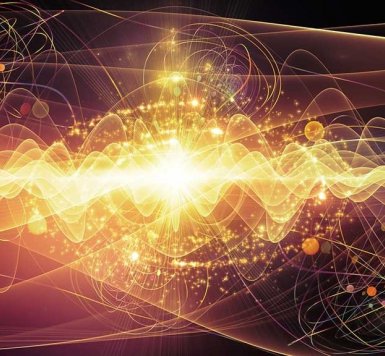 When photons spice up the energy levels of quantum particles

Quantum particles behave in mysterious ways. They are governed by laws of physics designed to reflect what is happening at smaller scales through quantum mechanics. Quantum state properties are generally very different to those of classical states. However, particles finding themselves in a coherent state are in a kind of quantum state which behaves like a classical state. Since their introduction by Erwin Schrödinger in 1926, coherent states of particles have found many applications in mathematical physics and quantum optics.
Now, for the first time, a team of mathematical physicists from Togo and Benin, call upon supersymmetry -- a sub-discipline of quantum mechanics -- to explain the behaviour of particles that have received a photon. These particles are subjected to particular potential energies known as shape-invariant potentials.
In a paper published in EPJD , Komi Sodoga and colleagues affiliated with both the University of Lomé, Togo, and the University of Abomey-Calavi, in Cotonou, Benin, outline the details of their theory. These findings are relevant to scientists working on solving quantum optics and quantum mechanics applications.
The authors show that their new states are not distributed in a classical way. The way the number of photons is distributed is different from the distribution in conventional coherent states. Their work can be applied to all models satisfying shape invariance conditions for which an exact solution exists, such as three-dimensional harmonic oscillator, Coulomb or Morse potentials, etc.

Einstein's "spooky action at a distance" is one of the most paradoxical and confounding aspects of quantum mechanics, but researchers have just demonstrated that it may not be as paradoxical as we thought. In a new study, scientists from the Canadian Institute for Advanced Research demonstrated that quantum particles' trajectories are not solely products of the collapse of their wave functions, but have actual trajectories that are nevertheless still affected by "spooky" entanglement, which have now been dubbed "surreal" trajectories.

Larger objects that are subject to the laws of classical physics have "real" trajectories, meaning they travel from one point to another and their paths are unaffected by measurement. On the quantum level, it gets a little more counterintuitive, as the uncertainty principle states that one can never know both the location and the momentum of a particle. So in the classic double-slit experiment, photons that are sent through a screen with two parallel slits will have uncertain locations until we observe them, at which point the system is disturbed and the photons stop in their tracks. This leads to the seemingly paradoxical conclusion that observing the photons "causes" the location of the photon after the fact.

According to the standard interpretation of quantum mechanics, the photons don't have a "real" trajectory through either slit, but rather have a probabilistic wave function that is collapsed once the photon is observed going through either slit. So we can know the probability of the particle being in any one location at any time, but there is no actual, singular path the photon is taking.

Another interpretation of quantum mechanics, called the De Broglie–Bohm theory, holds that there is a "real" trajectory taken by the particle, even when it's not observed. It claims that the seemingly paradoxical behavior occurs because the particles are controlled by the wave function of a "guiding equation" of a system. The wave function is still probabilistic, but the particles themselves have real trajectories. Aephraim Steinberg and his colleagues apparently demonstrated this phenomenon in 2011, when they experimentally showed that taking the average of "weak" observations of the double-slit experiment, which disturbed the system as little as possible, showed trajectories for the particles that were similar to classical trajectories.

Critics of this experiment claimed that the results were inconsistent with the effects of entanglement; when two quantum particles become entangled with each other, a measurement of one particle affects the other, which leads to incorrect predictions for the trajectories of the particles. They called these unpredictable paths "surreal" trajectories, rather than real ones.

In the new study, the researchers experimentally demonstrated that the "surreality" of quantum particles is the result of nonlocality. A nonlocal theory, like this variation of the De Broglie–Bohm theory, contends that all particles are impacted by the guiding equation of an entire system, allowing for "action at a distance." This is a direct contrast to local theories, which contend that there must be some sort of medium in between two particles that allow them to affect each other. In this particular theory, the distance at which a particle can be impacted by another particle depends only on the boundaries of the system, which could theoretically extend to the entire universe.

When the researchers took nonlocality for granted, the entanglement of photons was perfectly consistent with their theory. When the particles were considered together rather than separately, there were no incorrect predictions and the photons took paths that were similar to classical trajectories.

The researchers are not claiming, however, that the standard interpretation of quantum mechanics is incorrect, or that these "surreal" trajectories are what is "actually happening" on the quantum level. Rather, they are claiming that we still have no idea what is happening in the quantum world, because the standard interpretation and the De Broglie–Bohm theory are equally consistent with observational evidence, and are mathematically equivalent.

"I'm less interested in focusing on the philosophical question of what's 'really' out there. I think the fruitful question is more down-to-earth," co-author Steinberg told Phys.org. "Rather than thinking about different metaphysical interpretations, I would phrase it in terms of having different pictures. Different pictures can be useful. They can help shape better intuitions."

The Physics of Sound 1