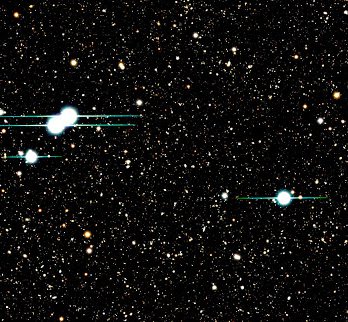 In order to follow the history of the universe during this era, all we need to know is how hot everything was at any given moment. Or to put it a different way—how is the temperature related to the size of the universe as the universe expands?

It would be easy to answer this question if the radiation could be considered to be expanding freely. The wavelength of each photon would have simply been stretched out (by the red shift) in proportion to the size of the universe, as the universe expanded. Furthermore, we have seen in the preceding that the average wavelength of black-body radiation is inversely proportional to its temperature. Thus the temperature would have decreased in inverse proportion to the size of the universe, just as it is doing right now.

Fortunately for the theoretical cosmologist, the same simple relation holds even when we take into account the fact that the radiation was not really expanding freely—rapid collisions of photons with the relatively small number of electrons and nuclear particles made the contents of the universe opaque during the radiation-dominated era. While a photon was in free flight between collisions, its wavelength would have increased in proportion to the size of the universe, and there were so many photons per particle that the collisions simply forced the matter temperature to follow the radiation temperature, not vice versa. Thus, for instance, when the universe was ten thousand times smaller than now, the temperature would have been proportionally higher than now, or about 30,000° K. So much for the true era of radiation.

Eventually, as we look farther and farther back into the history of the universe, we come to a time when the temperature was so high that collisions of photons with each other could produce material particles out of pure energy. We are going to find that the particles produced in this way out of pure radiant energy were just as important during the first few minutes as radiation, both in determining the rates of various nuclear reactions and in determining the rate of expansion of the universe itself. Therefore, in order to follow the course of events at really early times, we are going to need to know how hot the universe had to be to produce large numbers of material particles out of the energy of radiation, and how many particles were thus produced.

The process by which matter is produced out of radiation can best be understood in terms of the quantum picture of light. Two quanta of radiation, or photons, may collide and disappear, all their energy and momentum going into the production of two or more material particles. (This process is actually observed indirectly in present-day high-energy nuclear physics laboratories.) However, Einstein's Special Theory of Relativity tells us that a material particle even at rest will have a certain "rest energy" given by the famous formula E =mc^2. (Herec is the speed of light. This is the source of the energy released in nuclear reactions, in which a fraction of the mass of atomic nuclei is annihilated.) Hence, in order for two photons to produce two material particles of mass m in a head- on collision, the energy of each photon must be at least equal to the rest energy mc2 of each particle. The reaction will still occur if the energy of the individual photons is greater than mc2; the extra energy will simply go into giving the material particles a high velocity. However, particles of mass m

cannot be produced in collisions of two photons if the energy of the photons is below mc2, because there is then not enough energy to produce even the mass of these particular particles.

Evidently, in order to judge the effectiveness of radiation in producing material particles, we have to know the characteristic energy of the individual photons in the radiation field. This can be estimated well enough for our present purposes by using a simple rule of thumb: to find the characteristic photon energy, simply multiply the temperature of the radiation by a fundamental constant of statistical mechanics, known as Boltzmann's constant. (Ludwig Boltzmann was, along with the American Willard Gibbs, the founder of modern statistical mechanics. His suicide in 1906 is said to be due at least in part to philosophical opposition to his work, but all these controversies are long settled.) The value of Boltzmann's constant is 0.00008617 electron volts per degree Kelvin. For instance, at the temperature of 3,000° K, when the contents of the universe were just becoming transparent, the characteristic energy of each photon was about equal to 3,000° K times Boltzmann's constant, or 0.26 electron volts. (Recall that an electron volt is the energy acquired by one electron in moving through an electrical potential difference of one volt. Chemical reaction energies are typically of the order of an electron volt per atom; this is why radiation at temperatures above 3,000° K is hot enough to keep a significant fraction of electrons from being incorporated into atoms.)

For instance, the lightest known material particles are the electron e~ and the positron e+. The positron is the "antiparticle" of the electron—that is, it has opposite electrical charge (positive instead of negative) but the same mass and spin. When a positron collides with an electron, the charges can cancel, with the energy in the two particles' masses appearing as pure radiation. This, of course, is why positrons are so rare in ordinary life—they just don't live very long before finding an electron and annihilating. (Positrons were discovered in cosmic rays in 1932.) The annihilation process can also run backward—two photons with sufficient energy can collide and produce an electron-positron pair, the photon energies being converted into the electron and positron masses.

In order for two photons to produce an electron and a positron in a head-on collision, the energy of each photon must exceed the "rest energy" mc2 in an electron or a positron mass. This energy is 0.511003 million electron volts. To find the threshold temperature at which photons would have a fair

chance of having this much energy, we divide the energy by Boltzmann's constant (0.00008617 electron volts per degree Kelvin) and find a threshold temperature of 6 thousand million degrees Kelvin (6 x 10^9 ° K). At any higher temperature electrons and positrons would have been freely created in collisions of photons with each other, and would therefore be present in very large numbers.