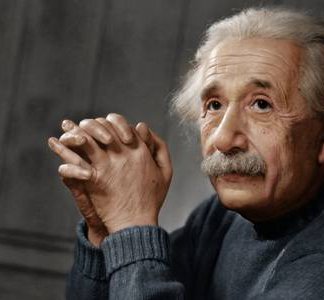 In order to attain the greatest possible clearness, let us return to our example of the railway carriage supposed to be traveling uniformly. We call its motion a uniform translation (“uniform” because it is of constant velocity and direction, “translation” because although the carriage changes its position relative to the embankment yet it does not rotate in so doing). Let us imagine a raven flying through the air in such a manner that its motion, as observed from the embankment, is uniform and in a straight line. If we were to observe the flying raven from the moving railway carriage, we should find

that the motion of the raven would be one of different velocity and direction, but that it would still be uniform and in a straight line. Expressed in an abstract manner we may say: If a mass m is moving uniformly in a straight line with respect to a co-ordinate system K, then it will also be moving uniformly and in a straight line relative to a second coordinate system K, provided that the latter is executing a uniform translatory motion with respect to K. In accordance with the discussion contained in the preceding section, it follows that:

We advance a step farther in our generalization when we express the tenet thus: If, relative to K, K is a uniformly moving co-ordinate system devoid of rotation, then natural phenomena run their course with respect to K according to exactly the same general laws as with respect to K. This statement is called the principle of relativity (in the restricted sense).

As long as one was convinced that all natural phenomena were capable of representation with the help of classical mechanics, there was no need to doubt the validity of this principle of relativity. But in view of the more recent development of electrodynamics and optics it became more and more evident that classical mechanics affords an insufficient foundation for the physical description of all natural phenomena. At this juncture the question of the validity of the principle of relativity became ripe for discussion, and it did not appear impossible that the answer to this question might be in the negative.

Nevertheless, there are two general facts which at the outset speak very much in favor of the validity of the principle of relativity. Even though classical mechanics does not supply us with a sufficiently broad basis for the theoretical presentation of all physical phenomena, still we must grant it a considerable measure of “truth,” since it supplies us with the actual motions of the heavenly bodies with a delicacy of detail little short of wonderful. The principle of relativity must therefore apply with great accuracy in the domain of mechanics. But that a principle of such broad generality should hold with such exactness in one domain of phenomena, and yet should be invalid for

another, is a priori not very probable.

We now proceed to the second argument, to which, moreover, we shall return later. If the principle of relativity (in the restricted sense) does not hold, then the Galileian co-ordinate systems K, K, KŽ, etc., which are moving uniformly relative to each other, will not be equivalent for the description of natural phenomena. In this case we should be constrained to believe that natural laws are capable of being formulated in a particularly simple manner, and of course only on condition that, from amongst all possible Galileian co-ordinate systems, we should have chosen one (Ķ ) of a particular state of motion as our body of reference. We should then be justified (because of its merits for the description of natural phenomena) in calling this system “absolutely at rest,” and all other Galileian systems K “in motion.” If, for instance, our embankment were the system Ķ , then our railway carriage would be a system K, relative to which less simple laws would hold than with respect to Ķ . This diminished simplicity would be due to the fact that the carriage K would be in motion (i.e. “really”) with respect to Ķ . In the general laws of nature which have been formulated with reference to K, the magnitude and direction of the velocity of the carriage would necessarily play a part.

We should expect, for instance, that the note emitted by an organ-pipe placed with its axis parallel to the direction of travel would be different from that emitted if the axis of the pipe were placed perpendicular to this direction. Now in virtue of its motion in an orbit round the sun, our earth is comparable with a railway carriage traveling with a velocity of about 30 kilometers per second. If the principle of relativity were not valid we should therefore expect that the direction of motion of the earth at any moment would enter into the laws of nature, and also that physical systems in their behavior would be dependent on the orientation in space with respect to the earth. For owing to the alteration in direction of the velocity of revolution of the earth in the course of a year, the earth cannot be at rest relative to the hypothetical system Ķ throughout the whole year. However, the most careful observations have never revealed such anisotropic properties in terrestrial physical space, i.e. a physical non-equivalence of different directions. This is a very powerful argument in favor of the principle of relativity.