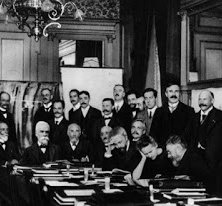 The photograph above shows many of the outstanding physicists that shaped modern physics during the first decades of the 20th century. The photograph was taken during the First Solvay Conference (Conseil Solvay) on Physics held in

The Solvay International Conferences on Physics, held every few years, are noted for their role in stimulating advances in atomic and quantum physics and were originally sponsored by Ernest Solvay (1838–1922), a Belgian industrial chemist and philanthropist who in the 1860s developed the ammonia process for the manufacture of sodium bicarbonate, widely used in the production of glass and soap.

In 1863 Solvay founded a company Solvay & Cie and during his lifetime transformed it into a global company currently headquartered in Brussels and specializing in pharmaceuticals, chemicals and plastics. Solvay was also a man of progressive social ideals and, after becoming wealthy, he founded several scientific institutes as well as philanthropic and charitable foundations. The International Solvay Insti- tutes are now funded from an endowment fund, the Solvay Company and a number of other sources. To date 23 Solvay International Conferences on Physics were held; however, in terms of notable participants the first one that was held in 1911 seems to be of the greatest historical importance.

From left to right seated at the table: