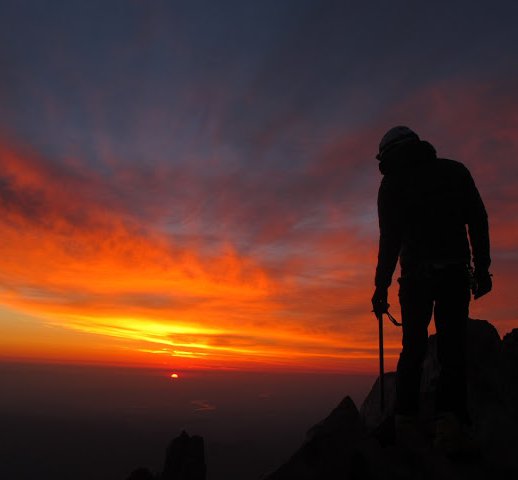 THE UNIVERSE will certainly go on expanding for a while. As to its fate after that, the standard model gives an equivocal prophecy: It all depends on whether the cosmic density is less or greater than a certain critical value.

If the cosmic density is less than the critical density, then the universe is of infinite extent and will go on expanding forever. Our descendants, if we have any then, will see thermonuclear reactions slowly come to an end in all the stars, leaving behind various sorts of cinder: black dwarf stars, neutron stars, perhaps black holes. Planets may continue in orbit, slowing down a little as they radiate gravitational waves but never coming to rest in any finite time. The cosmic backgrounds of radiation and neutrinos will continue to fall in temperature in inverse proportion to the size of the universe, but they will not be missed; even now we can barely detect the 3° K microwave radiation background.

At first no alarms will sound—for thousands of millions of years the radiation background will be so cool that it would take a great effort to detect it at all. However, when the universe has recontracted to one-hundredth its present size, the radiation background will begin to dominate the sky: the night sky will be as warm (300° K) as our present sky at day. Seventy million years later the universe will have contracted another tenfold, and our heirs and assigns (if any) will find the sky  intolerably bright. Molecules in planetary and stellar atmospheres and in interstellar space will begin to dissociate into their constituent atoms, and the atoms will break up into free electrons and atomic nuclei. After another 700,000 years, the cosmic temperature will be at ten million degrees; then stars and planets themselves will dissolve into a cosmic soup of radiation, electrons, and nuclei. The temperature will rise to ten thousand million degrees in another 22 days. The nuclei will then begin to break up into their constituent protons and neutrons, undoing all the work of both stellar and cosmological nucleosynthesis. Soon after that, electrons and positrons will be created in great numbers in photon-photon collisions, and the cosmic background of neutrinos and antineutrinos will regain thermal communion with the rest of the universe.

Can we really carry this sad story all the way to its end, to a state of infinite temperature and density? Does time really have a stop some three minutes after the temperature reaches a thousand million degrees? Obviously, we cannot be sure. All the uncertainties that we met in the preceding chapter, in trying to explore the first hundredth of a second, will return to perplex us as we look into the last hundredth of a second. Above all, the whole universe must be described in the language of quantum mechanics at temperatures above 100 million million million million million degrees (1032 ° K), and no one has any idea what happens then. Also, if the universe is not really isotropic and homogeneous, then our whole story may have lost its validity long before we would have to face the problems of quantum cosmology.

From these uncertainties some cosmologists derive a sort of hope. It may be that the universe will experience a kind of cosmic "bounce," and begin to reexpand. In the Edda, after the final battle of the gods and giants at Ragnorak, the earth is destroyed by fire and water, but the waters recede, the sons of Thor come up from Hell carrying their father's hammer, and the whole world begins once more. But if the universe does reexpand, its expansion will again slow to a halt and be followed by another contraction, ending in another cosmic Ragnorak, followed by another bounce, and so on forever.

If this is our future, it presumably also is our past. The present expanding universe would be only the phase following the last contraction and bounce. (Indeed, in their 1965 paper on the cosmic microwave radiation background, Dicke, Peebles, Roll, and Wilkinson assumed that there was a previous complete phase of cosmic expansion and contraction, and they argued that the universe must have contracted enough to raise the temperature to at least ten thousand million degrees in order to break up the heavy elements formed in the previous phase.) Looking farther back, we can imagine an endless cycle of expansion and contraction stretching into the infinite past, with no beginning whatever.

Some cosmologists are philosophically attracted to the oscillating model, especially because, like the steady-state model, it nicely avoids the problem of Genesis. It does, however, face one severe theoretical difficulty. In each cycle the ratio of photons to nuclear particles (or, more precisely, the entropy per nuclear particle) is slightly increased by a kind of friction (known as "bulk viscosity") as the universe expands and contracts. As far as we know, the universe would then start each new cycle with a new, slightly larger ratio of photons to nuclear particles. Right now this ratio is large, but not infinite, so it is hard to see how the universe could have previously experienced an infinite number of cycles.

However all these problems may be resolved, and whichever cosmological model proves correct, there is not much of comfort in any of this. It is almost irresistible for humans to believe that we have some special relation to the universe, that human life is not just a more-or-less farcical outcome of a chain of accidents reaching back to the first three minutes, but that we were somehow built in from the beginning. As I write this I happen to be in an airplane at 30,000 feet, flying over Wyoming en route home from San Francisco to Boston. Below, the earth looks very soft and comfortable—fluffy clouds here and there, snow turning pink as the sun sets, roads stretching straight across the country from one town to another. It is very hard to realize that this all is just a tiny part of an overwhelmingly hostile universe. It is even harder to realize that this present universe has evolved from an unspeakably unfamiliar early condition, and faces a future extinction of endless cold or intolerable heat. The more the universe seems comprehensible, the more it also seems pointless.

But if there is no solace in the fruits of our research, there is at least some consolation in the research itself. Men and women are not content to comfort themselves with tales of gods and giants, or to confine their thoughts to the daily affairs of life; they also build telescopes and satellites and  accelerators, and sit at their desks for endless hours working out the meaning of the data they gather. The effort to understand the universe is one of the very few things that lifts human life a little above the level of farce, and gives it some of the grace of tragedy.